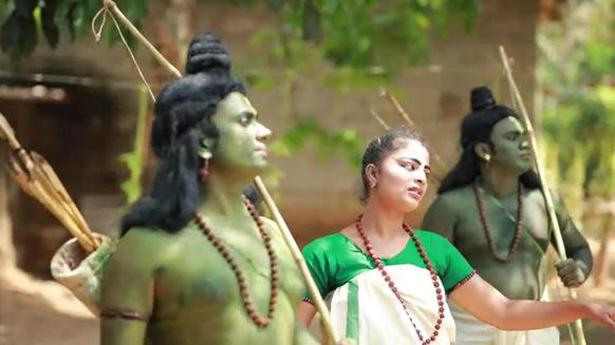 Decades ago, in erstwhile Desinganad (present day Kollam, Kerala), the days running up to Onam were busy for the Veda community. They performed ‘Seethakali’ (roughly translated to Sita’s play), a dance drama, which narrated the story of the Ramayana through Sita’s perspective.

The Vedas, who worked in the fields, performed it solely for their feudal lords, in the courtyards of their large houses. By the ‘80s the practice ended and the art form became nearly extinct.

In 2020, this Dalit Ramayana is being performed again with the same fervour and passion by a group of dedicated artistes from Kollam. T N Shajimon, a filmmaker and theatre artiste, who revived ‘Seethakali’ and brought it back to the public domain, says the process of re-rendering it was complicated, yet rewarding.

Shajimon won the Kerala Folklore Akademi award for the year 2018 (declared recently) for his efforts. ‘Seethakali’, he says, offers an interesting insight into the socio-political fabric of erstwhile Kerala.

While the rest of India celebrated Ramayan with Ram as God and hero, ‘Seethakali’ spoke of Sita’s trials and tribulations, her life and her choices. “Here, the Ram-Ravan war is not relevant and is therefore absent in the narrative. The characters are portrayed as simple human beings, without the aura of divinity,” says Shajimon, over phone from his hometown Perinad (in Kollam).

The dance drama may also have been used as a tool of resistance of the oppressed communities against the upper castes, observes Shajimon. “Earlier, this art form was practised at a time when women of lower castes were not allowed to cover their breasts, but the Sita in ‘Seethakali’ was played by a fully-clothed woman, which can be seen as a bold statement,” he adds.

When the Land Reform Act came into effect in the seventies, the Veda communities, who lived as a large unit, were displaced and they broke up into smaller units. Gradually, the art form faded.

Though the Pulaya community adopted ‘Seethakali’ and popularised it, playing it in village squares and on street sides, the practice too gradually ended in the 80s, with the advent of modern means of entertainment.

Shajimon worked for close to four years, collecting information and putting the narrative together. A few months into his research, he realised there was no written material to refer to, nor a single source who could provide an accurate overview. “It dawned on me that the task I had undertaken was indeed daunting,” he says.

He began his pursuit in 2017 at Perinad, which was a centre of ‘Seethakali’, talking to surviving members of the Veda and Pulaya communities, to gather material. “Initially, it felt like piecing together a jigsaw of foggy memories,” says Shajimon. “But I persisted with the interviews, recording as the elderly people sang,” he adds.

The entire narrative unravels through songs — he collected 28 of them over a period of three years. Since the Vedas worked in the fields, the songs have a folk style. Some of the songs have also been heavily influenced by popular folk music and dance traditions such as Vallappaattu, Kuthirappaattu and Rakshasappattu.

The movements involve a series of basic steps. “I have tried to create a piece that is as close to the original as possible,” he says. Shajimon’s team today has 20 artistes including actors, singers and percussionists. “I have tried to condense it to a two-hour performance without diluting its essence,” he says. The main characters comprise Sita, Ram, Lakshman, Ravan and Hanuman.

Shajimon and his team have performed across the length and breadth of Kerala, introducing ‘Seethakali’ to people who had never even heard of it. “We usually give a brief introduction and its historical context before the performance and the response we got was overwhelming,” he says, adding, “While the older people enjoy the story, the younger ones appreciate it on a different level. They seem to love the anti-hero. Ravan, most times, draws the most applause.”

Any ancient song related to the art form that is discovered would be verified and added to the repertoire, he says.

The ultimate aim, however, is to bring it back to the status of populist art from like it was in history — “We want Perinad to be known as a ‘Seethakali’ centre, as it was before.”