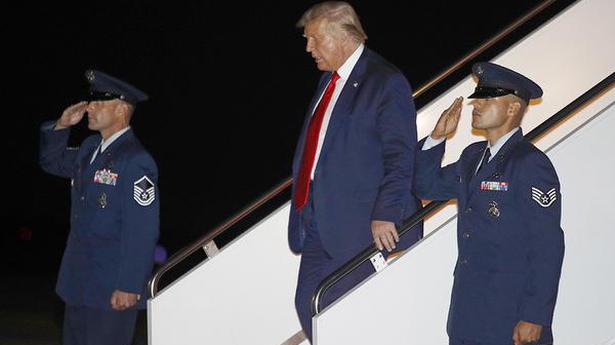 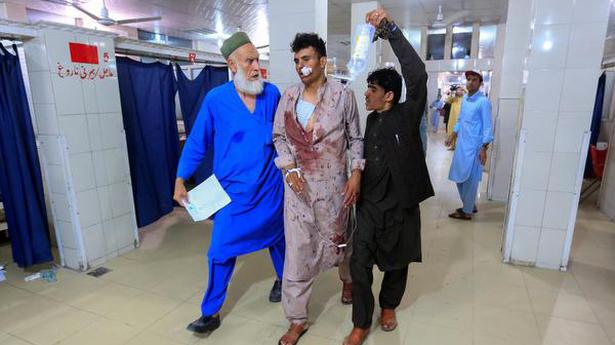 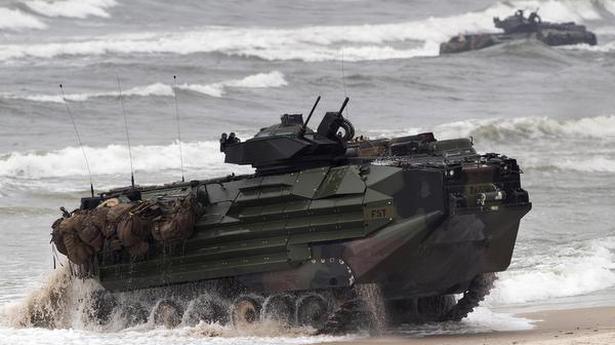 The Islamic State affiliate in Afghanistan, known as IS in Khorasan province, claimed responsibility for the attack. The IS affiliate is headquartered in Nangarhar province.

Sunday’s attack comes a day after the Afghan intelligence agency said a senior IS commander was killed by Afghan special forces near Jalalabad.

The Taliban’s political spokesman Suhail Shaheen told The Associated Press, “We have a cease-fire and are not involved in any of these attacks anywhere in the country,” but said he was not aware of the details of the Jalalabad attack.

The Taliban declared a three-day cease-fire starting Friday for the major Muslim holiday of Eid al-Adha.

The Taliban had also denied involvement in a suicide bombing in the eastern Logar province late Thursday, which killed at least nine people and wounded at least 40, authorities said.

Afghanistan has seen a recent spike in violence, with most attacks claimed by the local IS affiliate.

A United Nations report last month estimated there are around 2,200 IS members in Afghanistan, and that while the group is in territorial retreat and its leadership has been depleted, it remains capable of carrying out high-profile attacks in various parts of the country, including Kabul.

That deal was struck to allow the US to end its 19-year involvement in Afghanistan, and calls on the Taliban to guarantee its territory will not be used by terrorist groups. The deal is also expected to guarantee the Taliban’s all-out participation in the fight against IS.

Still, a United Nations report last week said Afghanistan saw a 13% drop in the number of civilians killed and wounded in violence across the country in the first six months of the year, compared to the same period last year.

The report credited the drop in casualties in part to the reduction of operations by international forces — which now only act when called upon and in support of the Afghan forces — and also to a decrease in the number of attacks by IS.

The report said the UN had recorded 17 attacks by IS that caused civilian casualties during the first six months of 2020, down from 97 attacks in the same period last year.

Overall, the UN said 1,282 people were killed in violence in the first six months of 2020 in Afghanistan and 2,176 were wounded. As droughts, floods and pests took turns in affecting their crop over the last few years, nearly 60 women farmers in Ms. Karunavathi’s village are neck-deep in debt. “It began with one loan to cope with a failed crop.” And then led to another loan to cope with the first loan. And soon, to a third. “Today, we’re trapped in four, five loans each with no way to repay,” she says, speaking of the stifling impact of microfinance loans that came to their doorsteps, with the exorbitant interest rates hidden in fine print.

“We didn’t know or understand the terms when we signed up for these loans. But now, we realise we are paying up to 200 % interest in some cases,” says K.A. Irangani Siriyalatha.

Struggling to repay their loans, some women in their group mortgaged their farmland, while a few died by suicide, amid growing anxiety and harassment from collection agents of the lending companies, according to the women who have got together to make their plight known and seek relief. Their collective effort to build awareness showed them that the problem was bigger than they had imagined. Just like them, thousands of women in the district had taken predatory microfinance loans like them to survive.

They met several local and powerful national leaders in power. Their campaign drew attention from the highest levels of the former Maithripala Sirisena–Ranil Wickremesinghe government. They even got specific assurances from the Ministry of Finance and the Central Bank. Except that none of the promised relief plans was executed in time.

They voted for a new promise last year. “When President Gotabaya Rajapaksa stood for presidential elections, he said he would solve our problem. He even mentioned it in his manifesto. Since he is not a regular politician, we felt he might be different,” Ms. Karunavathi says, explaining her vote for the retired Lieutenant Colonel nine months ago. “Nothing much has changed so far, but we really hope his government will do something after this election.”

It is widely expected that the Rajapaksas’ Sri Lanka Podujana Peramuna (SLPP or People’s Party)-led alliance will secure a parliamentary majority in the August 5 general elections, with possibly over 100 MPs in the 225-member legislature.

But the women of Chandanua Pokuna have very low expectations from the aspiring elected representatives, including former President Sirisena, from their district.

Mr. Sirisena, who hails from the neighbouring Laksha Uyana village, is in the fray to enter Parliament after re-aligning himself with the Rajapaksas.

While in office, Mr. Sirisena launched the ‘Pibidemu [Awakening of] Polonnaruwa’ programme that included large development projects, and notably a speciality hospital that China gifted to treat chronic kidney ailments common among farmers in the region. But many small farmers remain untouched.

“They thought Polonnaruwa begins and ends in the town area,” says K. Suneth Aruna Kumara, a community worker. The women agreed with him, asking how big development could help those caught between drastically low cultivation and mounting debt.

The challenge facing the women is a more recent symptom of a long-ignored problem, according to farmer groups. Nearly three lakh people in this district are engaged in agriculture, some of whom are landless. While paddy production here is the highest in the country, its procurement and sale are controlled by a handful with known links to powerful politicians, according to M.K. Jayatissa, a farmer and long-time activist. “It is an irony that farmer producing all this paddy are kept like beggars. And those producing their paddy for low prices, sell it in the market for millions and make huge profits. This situation will change only when farmers are able to take control of the value addition as well,” he notes.

The discontent among farmers, in a country where people eat at least one rice meal a day, tells a larger story of Sri Lanka’s diminishing focus on agriculture, according to T.B. Sarath, General Secretary of the All Ceylon Farmers’ Federation affiliated to the Opposition Janatha Vimukthi Peramuna, who is also contesting polls from Polonnaruwa.

In his view, the trend began after Sri Lanka liberalised its economy in 1977. The sector’s contribution the GDP dropped significantly since. A World Bank survey of 1973 on agriculture, “the largest productive sector” then, states that it contributed 34.7% of the GDP in 1970. By 2018 agriculture’s share to the national GDP dropped to 7%, according to official data.

The last few years have not only witnessed severe droughts and floods, but also recurring farmer protests in different parts of the country, demanding irrigation, fertilizer subsidies and better paddy prices. “But we have not had any serious discussion on our national agriculture policy. Governments don’t care,” Mr. Sarath notes. Barring a few garment factories, the district has seen few industries being set up. Wary of hasty or thoughtless industrialisation, locals emphasise the need for industries based on local resources, including paddy, vegetables and fruits such as wood apple and guava.

Meanwhile, farmers leading precarious lives, wait to see if their distress might reduce, at least a little.

“That is why we vote despite everything, but sometimes I wonder what is the point,” says N.R. Gnanavathy Menike, another farmer repaying multiple loans. “You know, it has been a long time since I slept at night.”

U.S. astronauts Bob Behnken and Doug Hurley, who flew to the International Space Station in SpaceX’s new Crew Dragon, splashed down in the capsule in the Gulf of Mexico on Sunday after a two-month voyage that was NASA’s first crewed mission from home soil in nine years.

Mr. Behnken and Mr. Hurley undocked from the station on Saturday and returned home to land in the waves off Florida’s Pensacola coast on schedule at 2:48 p.m. ET following a 21-hour overnight journey aboard Crew Dragon “Endeavor.”

The successful splashdown was a final key test of whether Elon Musk’s spacecraft can transport astronauts to and from orbit a feat no private company has accomplished before.

“On behalf of the SpaceX and NASA teams, welcome back to Planet Earth. Thanks for flying SpaceX,” SpaceX mission control said upon splashdown.

For the return sequence, on-board thrusters and two sets of parachutes worked autonomously to slow the acorn-shaped capsule, bringing Mr. Behnken and Mr. Hurley’s speed of 17,500 miles per hour in orbit down to 350 mph upon atmospheric reentry, and eventually 15 mph at splashdown.

This photo provided by NASA shows from left, astronauts Bob Behnken, Chris Cassidy and Doug Hurley during an interview on the International Space Station on Friday, July 31, 2020.

The crew will spend up to an hour floating inside the capsule before joint recovery teams from SpaceX and NASA retrieve them for a helicopter trip ashore. There they will undergo medical checks ahead of a flight to NASA’s Johnson Space Center in Houston, Texas.

Billionaire entrepreneur Musk’s SpaceX became the first private company to send humans to orbit with the launch of Mr.Behnken and Mr. Hurley, who have spent more than two months on the space station.

The landmark mission, launched from NASA’s Kennedy Space Center on May 31, marked the first time the U.S. space agency launched humans from American soil since its shuttle program retired in 2011. Since then the United States has relied on Russia’s space program to launch its astronauts to the space station.

Mr. Behnken and Mr. Hurley’s homecoming was also the first crewed splashdown in an American capsule in 45 years.

The pair undocked from the space station late on Saturday and began gradually decreasing their orbital altitude overnight, awaking Sunday morning to recorded wake-up calls from their sons.

“Good morning Dragon Endeavor,” Mr. Hurley’s son said in a recorded message sent to the capsule. “I’m happy you went into space but I’m even happier that you’re coming back home.”

NASA officials have said Crew Dragon, a pod with seven astronaut seats, was in a “very healthy” condition while docked at the space station, where astronauts conducted tests and monitored how the spacecraft performs in space.

NASA, aiming to galvanize a commercial space marketplace, awarded nearly $8 billion to SpaceX and Boeing Co collectively in 2014 to develop dueling space capsules, experimenting with a contract model that allows the space agency to buy astronaut seats from the two companies.

“Great to have NASA Astronauts return to Earth after very successful two month mission,” President Donald Trump wrote on Twitter. “Thank you to all!”